NEW BUFFALO, Mich. — New Buffalo Area Schools is looking to hire a radical LGBTQ organization for professional development of its middle school teachers under the guise of anti-bullying. The school board approved a grant application, put together by one of the district’s music/band teachers, to bring in an organization that has a main focus of recruiting children to create LGBTQ clubs inside of schools.

REAL News Michiana obtained the grant application through a Freedom of Information Act Request. In it, teacher Christina Beushausen, describes the professional development as “role play” exercises from the Executive Director of the OutCenter of Southwest Michigan, Mary Jo Schnell.

The OutCenter focuses much of its efforts on pushing for LGBTQ clubs in schools. On its website, it advertises a “Teen Pride Summit Series” where it says the OutCenter will “Help you start your school’s GSA (Gay Straight Alliance club).” The summit covers a host of issues on how to create a club constitution, fundraising, events and how to recruit for the clubs.

While her organization is built to infiltrate and influence schools, Mary Jo Schnell herself is extremely vocal about not allowing parents to have a say in the education of their children. Her social media is full of posts lambasting parents for disagreeing with progressive indoctrination. She also attacks conservatives, Thanksgiving and Chick-fil-A while promoting censorship and Critical Race Theory. You can see several of those posts below.

Despite all of this, the school board voted unanimously in favor of the grant application (Chuck Heit was not present and did not vote), that was supported by Superintendent Jeff Leslie, on Monday night.

And, even though he recommended the grant application be approved in front of the board, Leslie told RNM he had no information or knowledge about Schnell or the OutCenter. Instead, he explained how music teacher Christina Beushausen was doing all of this as part of her coursework toward a “Specialty Degree” from Western Michigan University.

“We have a small, tight-knit community, if parents have concerns they should feel confident and comfortable bringing them to us.” Leslie said.

Facebook
Twitter
Telegram
Email
Previous articleNiles Schools CRT Lesson: Microagressions for 1st Graders
Next articlePHM School Board Should be Ashamed of Themselves

Health Board President FIRED by GOP 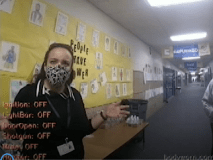