NILES, Mich. — REAL News Michiana has received video of the Niles Chief of Police physically pushing a parent out of the building where a school board meeting was being held earlier this month, then closing the door, preventing other parents and citizens from attending as well.

In the video outside of the September 20th meeting, Chief James Millin identifies himself to one parent and explains to others that they are not allowed in without wearing masks. The parent, Ryan Candler, is on the phone with the police department at the time, requesting officers help in allowing the parents inside.

“Who are you talking to?” Chief Millin can be heard saying. “Your attorney or somebody to get you arrested?”

“Ask them if I out rank them.” Chief Millin responds in part.

As the parent crosses the threshold of the doorway, you can see Chief Millin and a Sheriff’s Deputy quickly surround him. The Chief gets within inches of Candler’s face, and starts to shove him a bit. As Candler turns around and is walking away, Chief Millin shoves Candler in the back. Another parent can be heard saying “Chief, don’t do that.”

Immediately after the shove, Candler turns around and yells, “This is despicable!”

Video of the incident can be seen below.

Despite the district being so concerned about the spread of COVID-19 and forcing all visitors at the meeting to wear masks, it appears there was no virtual alternative for citizens to attend, listen or voice their concerns. That’s despite the fact that Niles Community Schools offered hybrid in-person and virtual meetings through June. You can see proof of those schedules below.

RNM reached out to Chief Millin and Niles Community Schools Superintendent Dan Applegate for comment. As of publication, neither had responded.

REAL News Michiana relies on member subscribers to keep going. As a subscriber, you’ll get an RNM mug and invites to special events. Help us continue to expose corruption and report on the news conservatives care about by subscribing here. 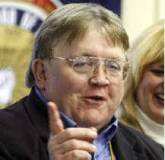